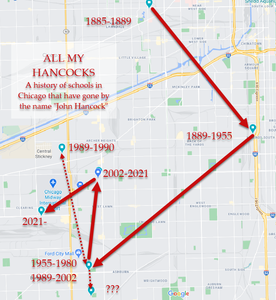 This article was written for the school paper, The Signature, by students in Hancock’s Journalism class.

This article was written for the school paper, The Signature, by students in Hancock’s Journalism class.

During Hancock’s Local School Council meeting on March 4, the Social Justice Club made a presentation to rename John Hancock College Prep.  In December, the Chicago Sun-Times reported that thirty CPS schools were named after people who owned slaves--John Hancock was one of them.  Under current CPS policy, the Local School Council must vote to change the name of a school.

Amanda Aguirre, a member of the Social Justice Club, wants to change the name of the school because of the history of John Hancock. While he is known for signing the Declaration of Independence, he owned slaves too. In her argument she said,  “A slave owner should not be the face of a school filled with minority students. What impression does that give off?”

Aguirre also said, “Changing the school name does not erase history.”  Hancock College Prep has built a good reputation for itself, Aguirre said, and she feels it’s time for change. She explained that it's not fair for the students to go to a school that has the name of a person who owned people. She ended the way many students who spoke ended: by quoting human rights activist Ginetta Sagan who said, “Silence in the face of justice is complicity, and we must not be silenced any longer.”

The members of the club initially believed Herbie Hancock, accomplished jazz musician from Chicago, would be the best person to rename the school after because it would conserve the last name “Hancock.” He is still alive, however, and the current CPS policy says schools can only be named after someone who has been deceased for at least six months. SJC wanted to challenge that CPS policy as well but they realized that might take some time and lots of effort.  SJC also previously suggested Curtis Mayfield, another Chicago musician who died in 1999 and who is a CPS graduate to replace John Hanock’s name.

But “after considering the lack of schools named after women, we decided it would be best to get rid of the Hancock name as a whole and start looking into some empowering women,” the Social Justice Club said.

To reinforce this statement, a SJC member explained that, according to the December investigation by the Sun-Times, only 75 out of 652 public schools in Chicago are named after women.  “We thought that becoming number 76 would be such a great honor to have,” Social Justice Club members said.

“As a Selective Enrollment high school often praised for academic achievement,” another member asked, “How can we be praised for such high standards when we’re named after someone who violated basic human rights?”

Cassandra Castillo-Valentin is a sophomore who believes the school should be named after someone who is African American. Considering it was just Black History Month, she said, “We will honor them in a way that lasts.”  The Sun-Times reported that 36% of CPS students are Black but only 12% of schools are named after Black people.  Castillo-Valentin also talked about a gender gap, leading her to want the school to be named after an African American woman. The Social Justice Club suggested Bessie Coleman, a pioneering pilot, Shirley Chisholm, the first woman and African American to run for president, and Marsha P. Johnson, an LGBTQ activist.

Violeta Fajardo, a freshman and a member of the Social Justice Club, stated that changing the name would bring racial justice to the school. Fajardo said, “The current name of our school does not represent the morals of this school.” She highlighted the importance of representation in the school, so the name should accurately represent the school as a whole.

Tim Toner, Hancock’s librarian, created a slide presentation about the history of our school’s name that shows how many “Hancocks” there have been in Chicago--six buildings named after John Hancock--starting in 1885.  Hancock schools has come and gone many times.

Caroline Gonzalez, an English teacher at Hancock who sponsors the Social Justice Club, has noticed how during the pandemic there seems to be negative stereotypes being spread about students. When “teens are portrayed as defeated and absent,” the conversations about students may make adults forget that “students are more than their traumas and struggles.”

During the pandemic, the Social Justice Club students have defied this narrative, Gonzalez said. They managed to keep up with the schoolwork, maintain their relationships with teachers and loved ones, and even keep up with “emotionally exhausting work that is social justice. It’s a battle,” Gonzalez said, “that adults should be more grounded in: the battle for equity and human dignity.”

Gonzalez emphasized that the Social Justice Club’s hard work should push adults to meet the students’ demands.  If students can engage in both schoolwork and maintain their courage to fight battles that shouldn’t be theirs, adults should try coming in and give support when the chance is given.

At the end of their presentation, the Social Justice Club called the Local School Council to action. “We call for an extra meeting this month to vote for a name change,” they demanded.  “If the LSC guidelines will not allow an extra meeting this month, we would like a vote to be added to April's agenda.  We would like a timeline for the next steps, and support for the fight for racial equality,” SJC members said.

“I know when we first talked about the idea of a name change, we just thought of it as a possibility,” Puentes said.

Puentes mentioned that the school’s history has already included major changes such as when it transitioned out of a middle school and, more recently, Hancock became a Selective Enrollment school after being a neighborhood school for years. She believes that we are now a stronger community.

Though she is in favor of the name change, she is concerned about the preparation and organizing for the name change.  She has been in contact with another school who has gone through the name-change process. She stated the beginning approach should be to create a subgroup to formally present the idea of the name change.

At the end of the discussion, it was unclear who would be part of Hancock’s subcommittee to lead this discussion.  This would be decided by the April meeting.

A big concern will be who covers the costs of the name change, rebranding, and additional costs. “I ask who’s responsible for paying for all this because with the new construction project, I’m also thinking about money and seeing bills. And that’s something that’s not even acknowledged in the current CPS policy [for changing a school’s name],” Puentes explained.

Ms. Puentes says the CPS school-renaming policy is being revised and that a certain number of public meetings need to be held before a name change could happen possibly one year from now.  The current policy time frame will not allow John Hancock to open its doors under a new name in the fall in the new building on 64th and Long.

In the December Sun-Times article, CPS’s Chief Equity Officer Maurice Swinney said he would “lead an effort to change the names first at those schools named for anyone involved in slavery, with people of color at the center of the discussions.”

If you'd like to submit your editorial, article, essay, artwork, or photos for publication, email the journalism teacher, Mr. Salazar, at rsalazar at cps dot edu.