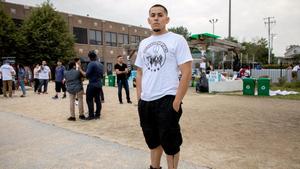 Increase The Peace continues hosting events, providing resources to their community throughout the pandemic

By Fatima Navarro, a student in Hancock's Journalism class

Abraham, 17, goes to the alternative school Peace and Education. He has grown accustomed to daily police and ambulance sirens passing through his neighborhood at Back of The Yards. Regardless of this, Abraham loves his community and is part of the process towards improving Back of the Yards along with surrounding neighborhoods like Englewood and Pilsen-- just to name a few.

Abraham met Berto Aguayo, co-creator of Increase the Peace in 2015. After learning that Aguayo was a former gang member and “flipped his life around in high school,” Abraham was inspired by the fact that Aguayo continued his education and graduated with a political degree from Dominican University. Aguayo has used his experience to form ITP as an initiative to bond with the teens in the neighborhood and work together towards peace and improvement, all of which Abraham enjoys.

One of the many things ITP offers that Abraham values are the events they host. There, Abraham has met people who have had a huge impact on his life. The main goal at ITP is to help the community and decrease gun violence all over the city of Chicago. On October 7, ITP announced their four year anniversary, celebrating hosting “more than 100 community actions [and training more than 300 neighborhood residents.”

Within these events are many food pantries where the individuals of the community can on fresh food during tough times. According to Newswire, a survey of 300 agencies conducted by Greater Chicago Food Depository revealed that “33 percent more individuals and families have turned to a Cook County pantry for food assistance than a year ago.”

The need for food has been increasing and the Chicago Food Depository has been attempting to serve communities. Similarly, according to the Chicago Public Schools website, select schools are giving out free meals from 8am- 1pm. Hancock is one of those select locations. Anyone who is in need of food can go pick up aliments from Hancock’s main door.

Increase The Peace also hosted events where they camp out from 5 p.m. to 5 a.m. in efforts to prevent gun violence. In an article published by the New York Times, 800 young people were identified as having “the greatest risk of  becoming victims or perpetrators of violence.” Gun violence has continued to terrorize teens in Chicago and they are ready to take initiative towards change through programs such as Chose to Change(C2C) as talked about in the New York Times.

At ITP, a school supply give-away was planned by Abraham himself in early September.  He says, “We gave kids notebooks, pencils, and that was my first event I had ever organized in ITP.” ITP has also started a street vendor relief fund since the pandemic greatly affected vendors’ income. The Washington Post reported an occurrence where a Chicago family raised $62,000 on a GoFundMe page for a 70 year old street vendor in hopes that he would be able to retire.

In addition to worrying about a decrease in customers, Alderman Burke authorized an ordinance which does not allow street vendors within the fourteenth ward. Because of this, Abraham emphasizes the importance of voting.

Abraham says that the next steps towards continuing to educate and improve the community is to  “keep on striving forward and work with the community.” This includes reaching out and recruiting more youth as well as networking in order to provide more resources.

Increase The Peace has guided Abraham and many other teens towards actively improving their community. Through Facebook and word of mouth, they have been able to promote events where they fill out census forms with families and work towards a safer environment.

The photo is from an article on Dominican University's Website about Aguayo's work with Increase the Peace.