To Be on Camera or Not to Be during Remote Learning 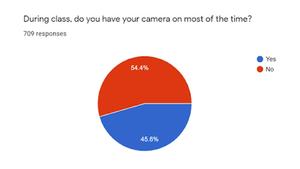 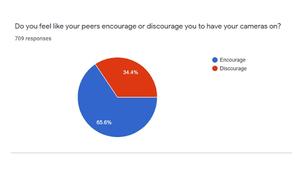 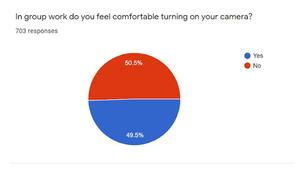 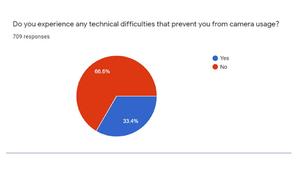 This article was written by Zachary Brzezicki, a student in Hancock's Journalism class.

As the COVID-19 pandemic rages on in the United States, Chicago Public Schools announced back in August that they would shift all schools to remote learning, leaving John Hancock College Prep’s 1,000 students and teachers to open up their computers and learn digitally. This is a continuation of the virtual learning environment that began in March, when the COVID-19 pandemic started its spread across the United States.

One month into the school year, the students’ faces that would be normally seen during in-person learning are turning into blank screens in virtual learning, as many students are choosing to turn their cameras off while in their Google Meets.

Somandeep Kaur, a senior at Hancock, is one of the students that chooses to have their cameras off. However, she stated that she does turn her camera on, but “only if [I’m] instructed to”.

“I’m uncomfortable looking at myself on the camera,” Kaur said. “I get uncomfortable when I see my siblings pass in the background.”

She explained that only one to two students have their cameras on in her classes, depending on the tasks the class is working on. “All my teachers are comfortable with us shutting down our cameras, but they would like to have our cameras on to be a part of the meeting,” she explained.

Although there are some parts of each class where Kaur stated that cameras would be turned on, it was only for the parts where the class is presenting or when the someone says “good morning” at the beginning of class.

Hancock’s Student Council surveyed students early this school year about their views on cameras during remote learning.  With over 700 students responding, less than half said they keep their cameras on most of the time.

This is not Kaur’s first experience with virtual learning. She was a part of a virtual nursing internship this past summer.

“There were around one-hundred people,” she explains. “All of us had our cameras off. We didn’t exactly have communication since it was all in the chat.”

Olivia Gonzalez, a senior at John Hancock College Prep, has mixed feelings about turning her camera on or off during class, which depends on her own opinion of the classes she is participating in.

“I have it on, but it depends on how I feel about the class,” she states. “If I’m not engaged, then I’ll have my camera off.”

Engagement was one thing for Gonzalez to decide what to do with her camera, which is a benefit when interactive slides, like Peardecks, are used in class. However, she felt her level of comfort alters also depending on how she feels based on what she looks like before class starts.

“One of the advantages is not being rushed to get ready as usual,” Gonzalez said. “Sometimes I don’t feel camera-ready, so that’s sometimes why I don’t turn my camera on.”

Jada Oliver is another senior at John Hancock College Prep, but she has had a different experience in terms of virtual learning.

She is also a student in the Genesys Works internship program, where she recalled everyone having their cameras on and their microphones muted when not speaking. The class also used the chat when needed.

Despite these advantages, Oliver still shows concern over the method of virtual learning and how effective it would be to make sure students are capable of learning the things that are needed for success. “We are not learning how we think we should be since it used to be natural to us,” she said.

Oliver has had her camera on for all of her classes and is a big proponent of others doing the same, as she thinks turning cameras on “improves the experience.”

In the Hancock Student Council Survey, about two-thirds of the over 700 respondents felt encouraged by peers to keep their cameras on.

Despite these things occurring, she doesn’t take that away from what she really wants to accomplish within her time in virtual learning.

“There might be some days where I feel gross and I just woke up, but I’m doing this for my education, not to look pretty on a Google Meets,” she said.

A recent survey from PR Newswire showed 75% of students, like Oliver, wanted more interaction with professors and other students.

“When I’m just seeing people’s names and profile pictures, it’s disheartening,” Oliver confessed. “I don’t feel like I am having a one-on-one conversation with somebody with just screens.”

She also showed empathy towards the teachers who have to deal with classes with no cameras and all screens: “Some teachers are just staring at blank screens, and it’s so sad,” she explained.

According to educationdata.org, college and university presidents felt that the highest level of challenge at their institutions with moving virtually was maintaining student engagement (81%). This is put more into question as cameras are turned off, as Oliver later mentions.

In the Hancock survey, students are evenly split between about feeling comfortable with cameras on in small groups.

Ms. Neidt, the AP Environmental Science teacher at Hancock, has a similar issue as a teacher.

“Teaching is a communal practice,” she says. “We need to feel a sense of community, and it’s difficult to feel that when you can’t see faces.”

This community, as Neidt explained, is constructed by many different face-to-face interactions that can be noticed by teachers when those cameras are on.

“We use students’ facial expressions to gauge how well things are going,” she explains. “Is this interesting? Is this boring? Are students taking notes? Are they wondering about something? Do they seem like they are interested in learning more? Those are the reactions we rely on continually as instructors, so losing that sense is really troublesome.”

However, for teachers like Neidt, the virtual learning environment has gotten to a point where, she says, students’ reasoning should be respected.

“Feeling safe as a student in a virtual classroom is something that we need to continue and strive for,” she claims. “The choice of not having the camera on might come down to not feeling safe in the space, not just with the teacher but with the other students.”

Neidt was one of the first teachers to use the tools provided in remote learning when schools started shutting down back in March, and she did this to attempt to continue to help her students prepare for the AP Environmental Science test that occurred in May. She also had some remote learning experience over the summer, as she taught in a six-week program at Northwestern University. Therefore, she has had experience in virtual learning settings to recognize the limits virtual learning has, especially when not everyone has their camera on.

In Neidt’s view, this does not only limit the students from actually engaging, but it also limits the teachers on how their lesson plans are working.

The students and teachers had many things that were shared about the virtual learning experience, especially in terms of camera usage, the comfortability of using the camera, and the ways that virtual learning can improve. Whatever way the environment of virtual learning provides in the future for Hancock students, camera usage, as Ms. Neidt puts it, is “something where you have to step outside of your comfort zone to be in a space where it feels like it’s the norm.”

The Hancock survey revealed one-third of the students facing technical difficulties with having cameras on.

These are the suggestions some Hancock students provided in the Student Council survey to become more comfortable with having cameras on: