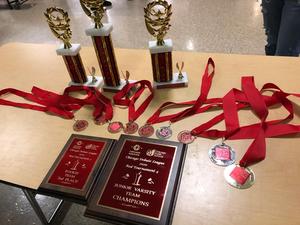 This article was written by Alejandro Flores, a student in Hancock's Journalism class and Debate Team member


On October 12, the Hancock debate team had its first tournament of the season. This time, it was conducted virtually. Nineteen Hancock students competed in teams of two with Kaitlyn Miranda, a brand-new debater, going solo.  Each  team ended up debating  two 80-minute rounds. The debate team members won a lot of awards, including rookie speaker awards, novice speaker awards, rookie team awards, and novice team awards. They won 35% of the awards--the most by any school.


Top Speaker Awards among over 80 students were earned by:


Evelyn Ramirez, the first place speaker for novices (returning debaters), feels like the best part is knowing your argument is superior to everything else. She said the worst part is getting caught off-guard by a cross-examination question.


The debate team started three years ago. It was started by Mr. Salazar who teaches English and  Journalism. The season starts in October and ends in February. The team goes to tournaments once a month on Saturdays to debate with other schools in the division. They read cases and build arguments for both sides.

The debate team originally gathered Tuesday and Thursday after school in room 201. The team now meets virtually Thursday.  The debate team reads cases, answers questions, and argues their position. This year, the cases discuss eliminating bail systems for those arrested, big-data policing, police body cameras, and whether or not the police should be defunded.


The skills learned in the debate team can be used in classes, jobs, and programs. Marco Avila has used skills from debate in his summer internship; for example, he presented and communicated ideas to policymakers and decision-makers in the local government. “Eighty-eight percent of respondents [in a study] consider the opportunity to develop soft skills important, including 60% who consider the opportunity to be very important"; as generations age, they believe it is more difficult for businesses to find qualified young people to meet the needs of the job,” according to a USA Today by Christie Shein titled “Honing Those Soft Skills.”


The debate has taught the member a lot of skills throughout the school year. The debate team is open to everyone. Monserrat Espinoza wants to recruit people to debate. There are some hidden gems that could be added to the team. The team is strong already but with more it could move up divisions. After she graduates, Espinoza  wants the debate team to have a big presence and not be overlooked anymore.


Students interested in joining still have time to prepare for the November 21 debate and should contact Mr. Salazar at rsalazar [at] cps [dot] org.