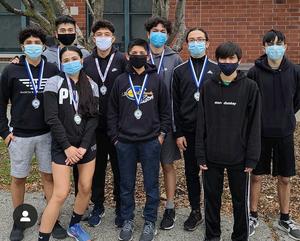 By Aldo Vazquez, a student in Hancock's Journalism class

Seniors Bernardo Perez and Izellah Ortiz will represent Hancock at the Cross-Country Sectionals this Saturday, October 31. Cross country was one of the two sports taking place at Hancock this fall season amid the ongoing pandemic--Covid-19. However, this season is not entirely like past seasons that the team has been accustomed to. Our current life changes have brought certain restrictions that have been placed for all high school teams participating this season.

When Hancock’s cross country athletes received the news early August that their season would be happening, many took time to decide whether they’ll be up to join during uncertain times, yet some knew the decision they would make right away. Bernardo Perez, a senior at Hancock and varsity cross country runner,  has now been part of the team for two years. “The decision wasn’t that difficult to be honest," he said when asked about the difficulty of making a decision to join this season.

Aware of the potential risks athletes are putting themselves with, Perez knew he’d be taking the necessary precautions for his health. The restrictions involve wearing face masks before and after the races, sanitizing regularly, and maintaining six feet distance.

Not everyone felt the same way, however. Gabriel Morales, a senior who participated in Hancock’s cross country team the past two seasons, chose not to join this year. “Even with all the safety precautions put in place, some of my family is considered high risk. Although I did really enjoy doing cross country for the last two years, I decided that my own enjoyment is not worth the risk on my family’s health," Morales said in response to taking a step back this season.

Of course, a season during a pandemic will not be the same as any other season. High schools have come together to set the necessary restrictions for the athletes' and coaches' safety. Hancock has organized a training schedule and routine that avoids close contact with one another. Masks are required during practices when the athletes are not running. Daily temperature checks are done before practices, as well as questions asked to monitor any exposure to the virus.

As far as a schedule for practice, Hancock’s cross country team only meets two days a week, compared to a full week of practice if it were a regular season.

Bernardo Perez was looking forward to another season as it would be his last, considering that last year's season was cut short following the CPS teachers strike. “If this season didn’t happen, it would’ve been a disappointment, especially for a high school senior. Last year, the strike cut the season short,” Perez said. The start of this season would grant many seniors the possibility to compete and enjoy cross country one last time. One of his best races was a 3 mile race, finishing with a time of 19:36.

“In-person practices are important for runners to get the best out of the workout. It is easy for people to fall back and not take their part outside practices. However, with our recent circumstances having two day practices isn't bad,” Perez said about in-person practices.

Travelling to race meets has also been affected this season with no bus that takes the whole team to the race. Instead, every individual is asked to find other methods of transportation. This, of course, is something that is hard for many cross country runners to find a solution to. “Some challenges I face during this season with restrictions is getting to where we are going to race without a bus because usually they are far and with school going on, we have to rush to get there on time,” Perez said.  With many avoiding public transportation, finding alternatives can be difficult for these athletes. Yet they find ways to overcome these obstacles.

Hancock’s cross country team has seen fewer participants than usual to limit close contact with each other. Past seasons, the team has seen between 25 and 30 athletes, compared to this year's season with just 13 athletes. Even though it is not a big team as other seasons, it has been a good way to create new relationships with teammates. When asked about the team's size this year, Bernardo Perez said the following: “I also like this because you can get to know your teammates better and create a better bond with them since there aren’t that many people now.”

Race meets now consist of fewer teams and fewer participants as a precaution. Those who joined cross country for the first time wouldn’t be getting the feel of a natural cross country environment, but it would certainly gain experience for rising stars. Julian Hernandez, a freshman who joined cross country this season, said “I knew cross country would challenge me and get md to feel what it’s like to race.” Hernandez was eager to perform to the best of his ability, even if it wasn’t going to be a normal atmosphere.

The pandemic has definitely brought many drastic, but necessary changes for Hancock’s cross country season. It is unlike any other season that these athletes have been through or even experienced; however, Hancock’s team has shown determination to surpass these obstacles as much as they can.

One of the meets-- a two mile race-- saw Hancock perform to their full potential. Bernardo Perez ran with a time of 12:34, finishing ninth place out of forty-three runners. The same meet also saw Izellah Ortiz, Hancock senior,  representing the girls varsity outstandingly with a fourth place finish out of 29 runners with a final time of 15:02.

Breaking personal records, achieving greatness and progression, this is the morale for Hancock’s cross country team. After a great performance in the CPS Championships, Hancock ran regionals on Saturday, October 24. Perez said, “In addition, it’s always fun running with your friends in practice and competing at the meets.”